How Much Can the Organization of Processes Help? — Case Study MTA Group x GetResponse 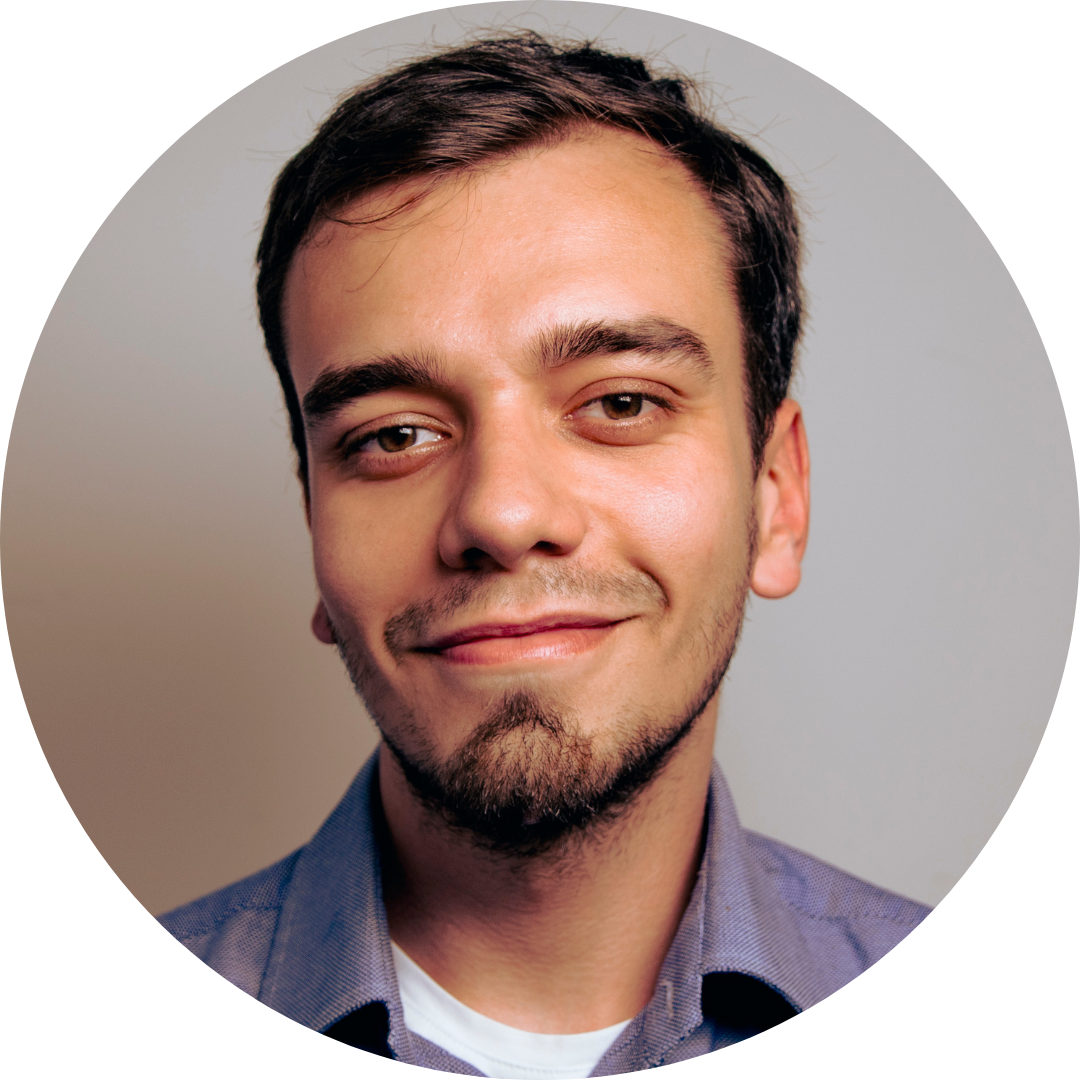 As your company grows, and has many services/products that need professional promotion, co-ordinating marketing activities and achieving performance goals, is becoming more and more complex. However, you can use several tools and ready-to-use solutions to increase your efficiency and save time managing your campaigns.

Over a year of collaboration between MTA Group and GetResponse, we have developed new processes to improve the Digital Marketing activities of our customer. The key to success was the organization and application of best practices in PPC GetResponse accounts.
What was the evolution of MTAG and GetResponse cooperation? We present the case study of this project.

A Few Words About GetResponse

GetResponse is a SaaS company that specializes in automating marketing processes. It offers software to efficiently support e-mail marketing, webinars or sales funnels.

The company is based in Gdańsk and serves more than 350 000 customers from 183 countries. It helps both start-ups and experienced players in the market by streamlining and automating marketing processes. The company has been on the market for 24 years and has been operating at global level since 2009. Today, GetResponse, a pioneer in marketing automation, does not plan to slow down.

How Did MTAG Begin Working With GetResponse?

The Digital Marketing team for GetResponse reached the conclusion at some point that they needed support to optimize their marketing efforts and in creating PPC campaigns. GetResponse’s scale, the acquisition of customers across multiple advertising platforms, and the global monthly budgets of tens of thousands of dollars a month (Google Ads alone), which meant that an external perspective was needed to help reinvent marketing processes.

When this time has come, a Polish company with global reach has asked for support from the MTA Group for performance marketing. This cooperation lasted from May 2021 to July 2022, and during that time the campaign outsourcing flow, reporting, analytical setup, methodology in marketing activities changed beyond recognition.

The Most Difficult Challenges of Our Cooperation

Initially, we were only involved in Google Ads campaigns, but we quickly realized with partners from GetResponse that more channels would be involved in the assistance needed. MTA has worked on Google Ads, Facebook Ads, LinkedIn Ads, Yandex Ads, DV 360, And Bing Ads. We have experience with this kind of campaigns, so despite the size of the markets where our customer was active, it was a challenge we met with several tools and new processes.

By working with the customer on campaigns, we did not just stop creating campaigns within the old account structures. We have noticed that a lot of value can lead to improved marketing processes and a new structure. Why?

GetResponse had more than 200 PPC campaigns on Google Ads and spent a lot of time managing them and understanding the purpose of each campaign. It did not help a large number of teams for which activities were carried out. So it was difficult to look at the marketing activities in advance and to look at what could be improved and what would work for the company. There were 10 teams we were working with and each action we were doing had to have a separate report generated, which meant that a large part of the attention was initially focused on reporting.

Due to the number of accounts, teams, and tools we were running, reporting and performance analysis took many hours of work. There was no live reporting and consistency in the discovery setup at the landing pages of promotional activities. Creating tags to track newly created promoted landing pages required a process to enable seasonal offers to be introduced efficiently and to track their effectiveness.

Each of the above-mentioned problem areas, processes, has been improved by MTA

What Did We Achieve Together?

Together with GetResponse, we have made changes that have greatly improved the organization’s digital marketing efforts. We have changed the naming, standardized the methodology used to execute and analyze the PPC campaign.

What’s more, we have built universal dashboards for GetResponse, which, thanks to the campaign nomenclature, included all of the customer’s teams. Staff on the GetResponse side could easily check performance of previously commissioned campaigns. So we have reduced the number of hours spent reporting (from up to 30 per month to around 7 per month). The time saved in this way could be invested in activities that gave more value to the customer.

In terms of reporting, instead of multiple reports from a given strategic area, 1 report has been implemented for all activities. Live reporting is another way for MTA professionals to offer a faster response to campaign optimization and a professional, cross-cutting perspective on the activities they are doing.

Progress in minimizing the amount of time spent preparing reports can be tracked in the chart below. 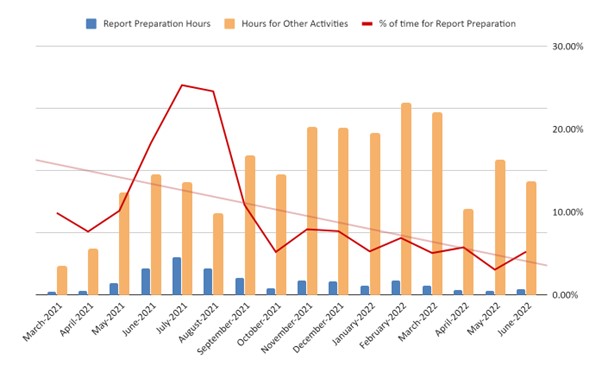 We’ve also created a dashboard where the customer can track the expenses of the channels they’re interested in in in one place.

We have reduced the number of ads accounts for GADS from 11 to 3, which greatly improved the transparency of data, improved campaign management, and optimized the hours spent on PPC activities. The previous number of accounts was the result of each account being invoiced separately internally. The introduction of clear naming has also saved time for rebilling activities.

The number of campaigns in global ads account has also decreased from 201 to 114. Digital Marketing activities spend has been organized.
We reviewed old campaigns that used to run on Facebook Ads, but they didn’t have any changes, and we’ve made them in order at this time. There were 10 advertising accounts on which we acted.

The campaign structure in your Google Ads account has also been changed to reflect the latest good practices, as follows:

Instead of 1 per country campaigns → we have created a per tier campaign depending on tCPA (i.e. the cost of the flight) + per function (per job).

After reviewing the customer’s business data, we decided to abandon the previous non-brand campaign session, which was primarily geographical breakdown. In that configuration, each country had 2 campaigns, both English and the native language of the country.

Instead, we took all English-language campaigns and divided countries, previously treated individually, into 7 tiers, which were dependent on our calculated Customer Acquisition Cost (CACU) target. We calculated this cost on the basis of the average revenues of the users in the market and their average conversion rate.

Thus, the breakdown of tCPA had two variables—geographical, tier and thematic keywords.

That’s not the end! For GetResponse, we have also created a universal setup for landing pages and event tracking and conversion. In addition to those for the landers, we have also standardized tracking for FBA, GADS, LinkedIn Ads. All in one place, at your fingertips. This setup is a solution that will help the business for years to come.

Get the Opinion of GetResponse Specialists on Working With MTA

Our customer was happy to work with MTA to the point that they decided to appreciate us on the Clutch platform. Here is what GetResponse has left behind after the collaboration.

“With MTA Digital, the customer has standardized the conversion tracking on all their PPC platforms. They had a great collaboration process using Jira and Slack to manage and communicate their progress. In addition, the team’s knowledge and understanding of the customer’s product demonstrates their commitment.” 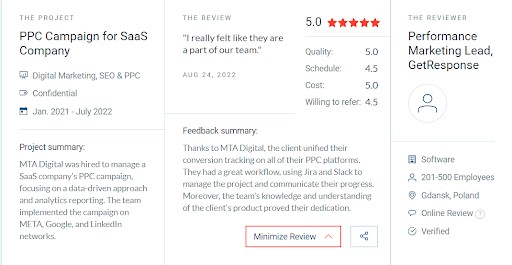